When you first start skydiving, the different formations groups do seem oddly named, infinite and confusing. By learning the common shapes and names you will be able to pick up new dives like a pro! Check out the 2 way grips, star, open, zipper, donut, sidebody, and bow below. Download the cheat sheet at the end!

A word of warning: there are no official names. Even some of the common formations can have different names (stairstep and phalanx for example). Many formations you can create do not even have names!

All formations are comprised of these 8 basic shapes. Study these first, and you will be well on your way! These formations can be mirrored, angled, or cheated. Learn more about what makes a formation a formation here.

Open Accordion is also the name of a single grip but it can be expanded to infinity. Usually just called an “open”. Related to its sibling the compressed accordion. A beginner-friendly formation.

Can be expanded to infinity. Looks like a giant zipper when there are enough people. A beginner-friendly formation.

Super popular and friendly 4-way exit. Besides the exit, it has a medium difficulty to build in freefall. Make sure the two center people are almost parallel so the person in the back can reach. Learn how to launch a bow here. 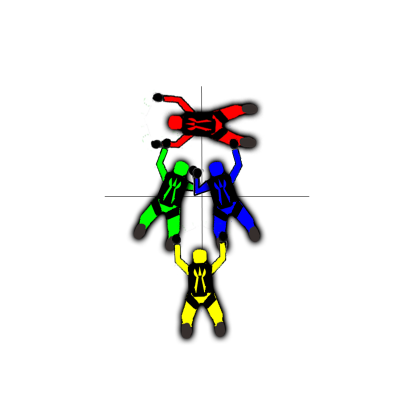 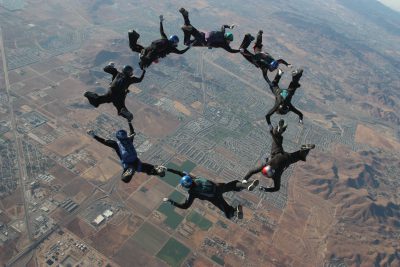 Another basic grip that skydivers can expand to infinity. Medium difficulty to build because it requires solid grip taking skills to pick up a sidebody.

Download the quick reference right here, right now! Go to the resources page for other formation cheat sheets and continuities.

Want to try some of them out with Christy? Book some tunnel and learn more.