Every wonder how teams know those fancy spinning moves? Read on to discover what blocks are, how you can correctly read a block diagram, and discover what version of seven spells certain doom!

Blocks are two-part moves in competition skydiving. They are worth two points in total. One point for the first formation and one point for correctly doing the middle and final formation.

There are 22 different moves in 4-way and 8-way dive pools.

Parts of a Block Diagram

The first box shows the first part of the formation to be built. This is called the top of the block.  The last box contains the ending formation, or bottom of the block.

An inter is an intermediate step.  It describes what maneuver between the top and bottom of the block. The inter is the chunky middle part that makes each one different.

If there is space between the people in this picture, it is an individual move. If they are touching each other it indicates a piece move – meaning you hold on to each other through the whole thing.

Directional Arrows and Degrees of Rotation

Many blocks have required rotation (either individual moves or with pieces). The required direction is demonstrated by arrows with degree numbers next to them.  If the arrow is bi-directional it is legal to turn either way.

The rule stresses that the degrees of rotation are approximate. Also, each piece has a center point.  These concepts allow teams to shave off a great deal of rotation using verticals and sheering techniques.  Details on how this all works are beyond the scope of this post.  However, if you execute the technique for the A class-blocks as demonstrated by a qualified coach you are doing it efficiently and correctly.

Some blocks mark the jumpers with symbols on the jumper’s back (in this case a circle, cross, and triangle).  These marks help distinguish each jumper throughout the move.  Without these, it would be impossible to tell if the triangle grabbed cross (as pictured above in block 7) or triangle must grab a different teammate from the one he started with.

It is legal to mirror a whole block, but it is not ok to mirror within the block. Mirroring means you can flip the formation as if you were looking at things in a mirror.

Many blocks require teammates to grip a partner or partners continuously.  If contact is shown within the inter, the subgroup must remain intact from the top of the block until the end of the block.  Releasing the grip at any point after building the top results in an infraction and the second portion of the block will not be scored. 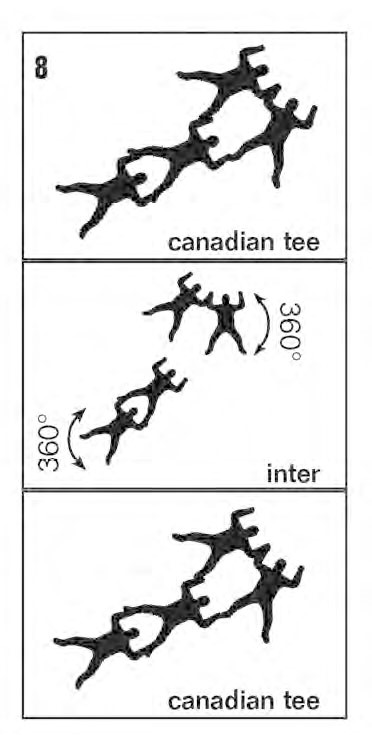 Blocks are fun to explore! Learning the techniques, flying while holding on to each other, and perfecting your time opens up a whole new world for 4-way and 8-way!

Want to see how these blocks are done the right way? I strongly recommend SDC Rhythm’s XP 401 app for a clear and correct video of all the blocks.